The Limatus Experience: My Style Story 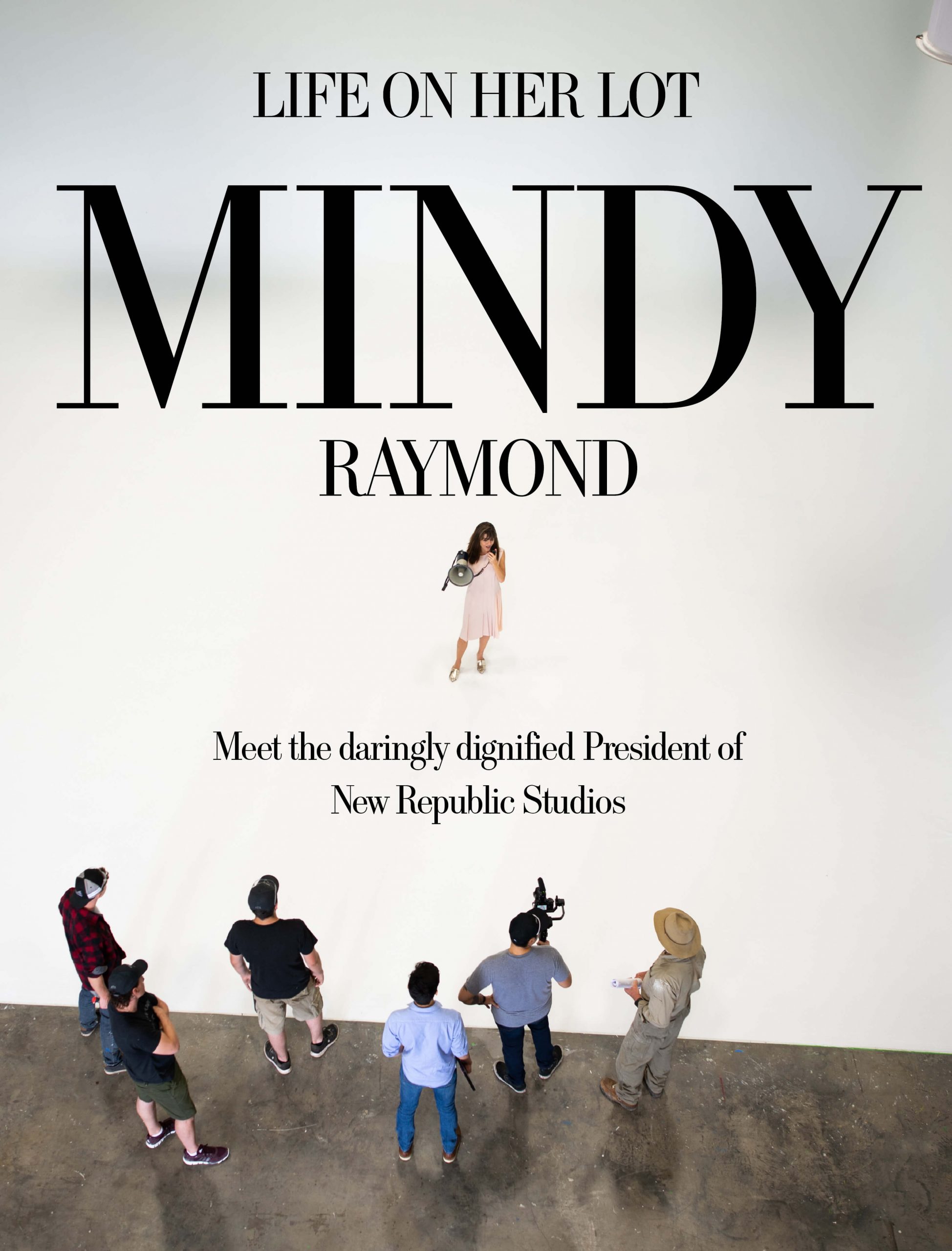 Tucked away down a winding dirt road in Bastrop, Texas sits a tranquil, unassuming Hill Country oasis behind a pair of oversized wrought iron gates: a 200-acre campus for creatives by the name of New Republic Studios. Actors, producers, cinematographers, writers, costume designers, set designers, and creators of every collaborative discipline have graced its sound stages and luscious, rolling landscapes to make award-winning films, viral video content, immersive technological experiences and much more. In charge of managing the day-to-day operational demands and nurturing the community of the Texas Hill Country’s Hollywood is none other than studios President, Mindy Raymond.

A face of spunky uplift for anyone who walks through the NRS administrative offices (and for anyone roaming the lots when she’s out checking on production progress and grounds staff), it is no secret that Mindy Raymond is respected and adored by everyone she welcomes onto the NRS campus. Her duties include everything from overseeing the studios’ exciting expansion plans, to making sure clients are comfortable at all times while working on their productions, to hopping in her rugged Polaris off-road Ranger to tour prospective partners and collaborators through the secluded sanctuary of acreage available, to opening a star-studded weekend workshop with inspiring words about creative community; Mindy does all of this (and much more), with endearing pluck and a light-up-the-world sized smile.

Although show business and the film industry have been around for over 100 years, there are still very deep-rooted connections between the Early Hollywood pioneers and today’s industry pioneers, like Mindy, who are painting the entertainment landscape for the creatives and consumers of the future. We looked to history to find a matching map of Mindy’s career and this issue’s inspiration, uncovering a woman whose extraordinary and under-documented contributions to cinema were unparalleled…a brilliant auteur who intuitively used her medium to advocate for progress and invite women colleagues to sit at tables and climb ladders with her an entire century before today’s #TimesUp and #MeToo movements galvanized. That woman was Lois Weber, and she lived from 1879 to 1939.

New Republic Studios President Mindy Raymond shares on her mission to bring more productions to Texas, her career background and how it prepared her for this new leading role, and her inspirational takeaways from the life of Lois Weber. 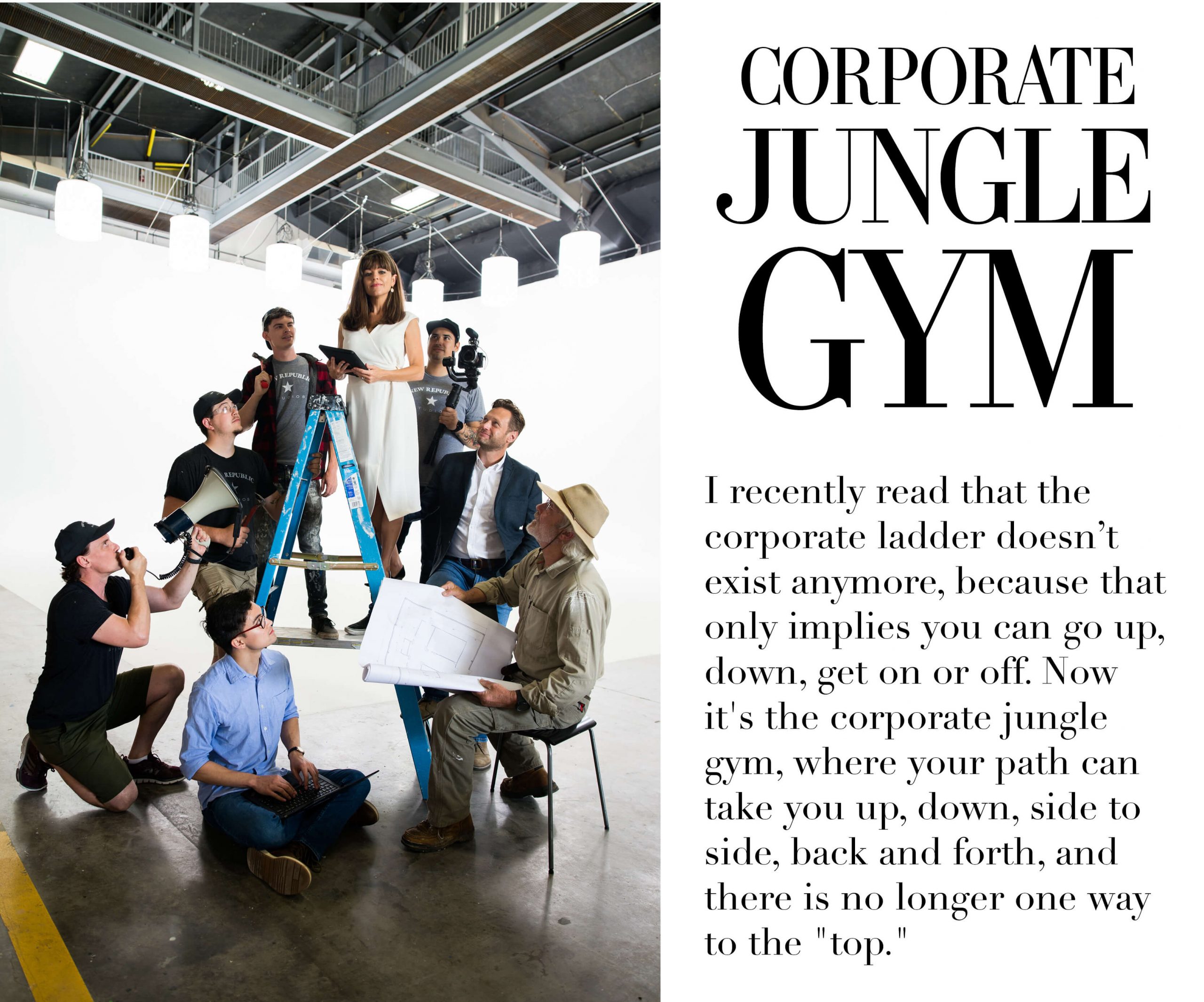 Eleanora Morrison: What is the mission of your work at New Republic Studios, and what started you on this unique career path?

Mindy Raymond: My mission in life is to bring more creative work to Texas–films, content, production work, immersive experiences, etc. From the forays into film as an actor in the beginning days of my career, I knew I wanted to be a part of this whole storytelling experience, both in front of and behind the camera. I was fortunate to be living and working in New York City, where I studied at a conservatory that also allowed me to dive into the world of making films.

It’s funny to look back on my path and see the twists and turns that have ultimately landed me where I am today. I recently read that the corporate ladder doesn’t exist anymore, because that only implies you can go up, down, get on or off. Now it’s the corporate jungle gym, where your path can take you up, down, side to side, back and forth, and there is no longer one way to the “top.” When I read this, it really resonated with me because my path has been a jungle gym of moves to land me here as New Republic Studios President. 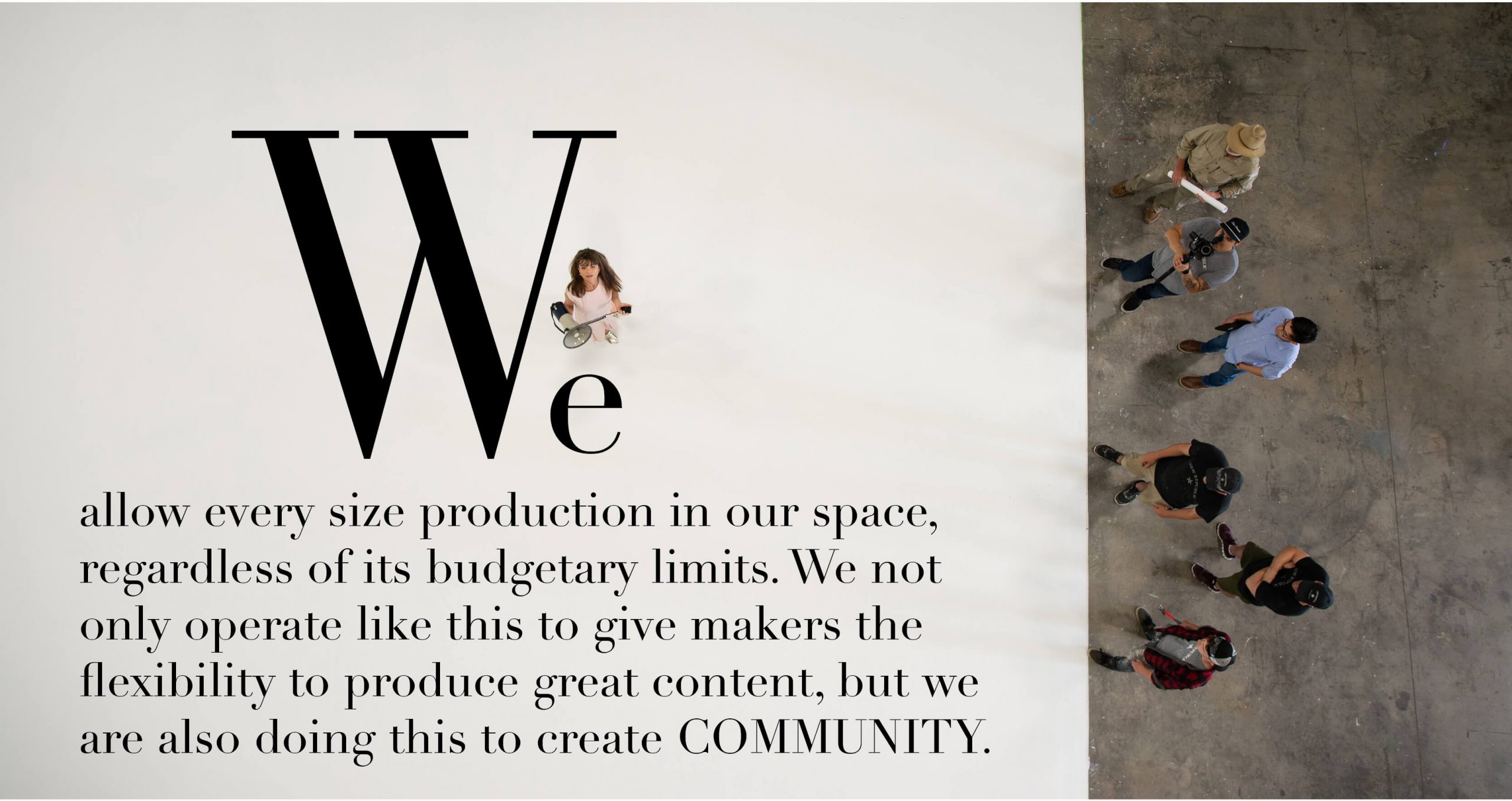 EM: What is the true function of your role as President of New Republic Studios?

MR: To put it rather simply, my role at New Republic Studios is to further the purpose of giving creatives and those in show business a welcoming place to do their thing. When our owner John Robison purchased what was formerly Spiderwood Studios here in Bastrop, Texas, we evolved to become New Republic Studios, operating with the belief that we are our own incentives—as creatives ourselves, we all know what is needed to put together projects at every scale, and we created a structure that turned those needs into a reality. We allow every size production in our space, regardless of its budgetary limits. We not only operate like this to give makers the flexibility to produce great content, but we are also doing this to create community. We have been fortunate to have many repeat clients because of the environment that has been fostered to ensure their comfort, kinship and ultimately their successes. 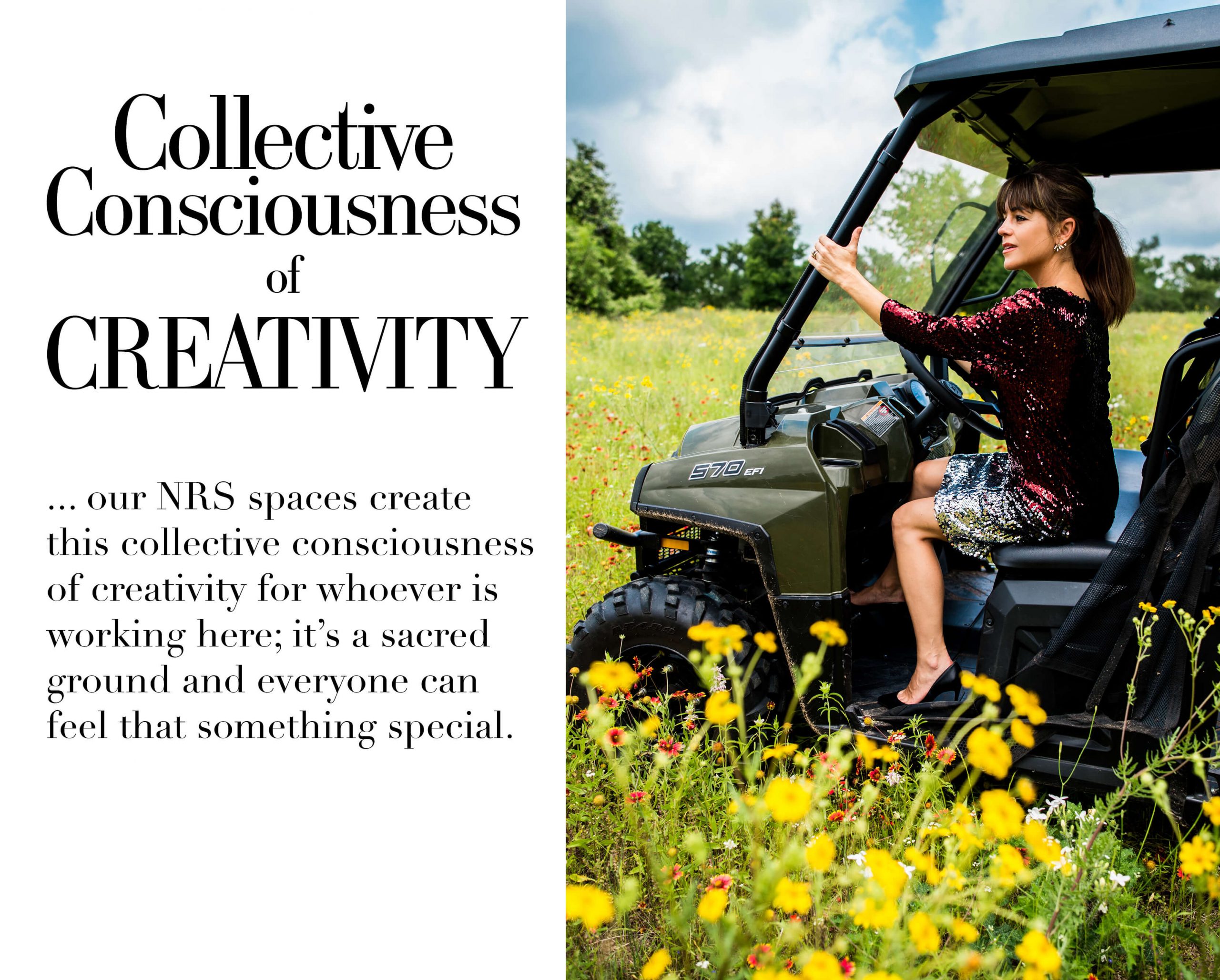 EM: How do you decide which projects and productions to work with and welcome onto the NRS creative campus?

MR: In my role, I am able to bring our studio’s mission into crystal clear focus as we expand and bring on our amazing partners. To quote Early Hollywood trailblazer and auteur Lois Weber when she was once asked something similar, she said, “Whenever I struck a winner for the screen, something clicked in my consciousness.” That is how I feel when I read certain scripts that I just know NRS (New Republic Studios) has to be a part of, like Sister Aimee and Fugitive Dreams. Beyond my own internal intuitions, our NRS spaces create this collective consciousness of creativity for whoever is working here; it’s a sacred ground and everyone can feel that something special. I am humbled, honored and just thrilled to bear the torch for our creative campus and community.

EM: What are some similarities you feel with Lois Weber, one of the pioneering women of Early Hollywood circa 1919, in relation to what you are doing to pioneer the future of the film industry here in Texas in 2019?

MR: Lois Weber was a true innovator and disrupter of the status quo. I strive to be that woman with each new role I take on. I feel very honored that the gentlemen who own this studio gave me the opportunity to step into this position. As President, I want to use this next phase of my career to inspire young girls and women who are interested in the world of production and show them that this is also a possibility for their future. Lois Weber’s leadership and mentorship paved the path for so many women in Hollywood, and that is very inspiring to me. When we lock arms as women, we can really rise to the top together. 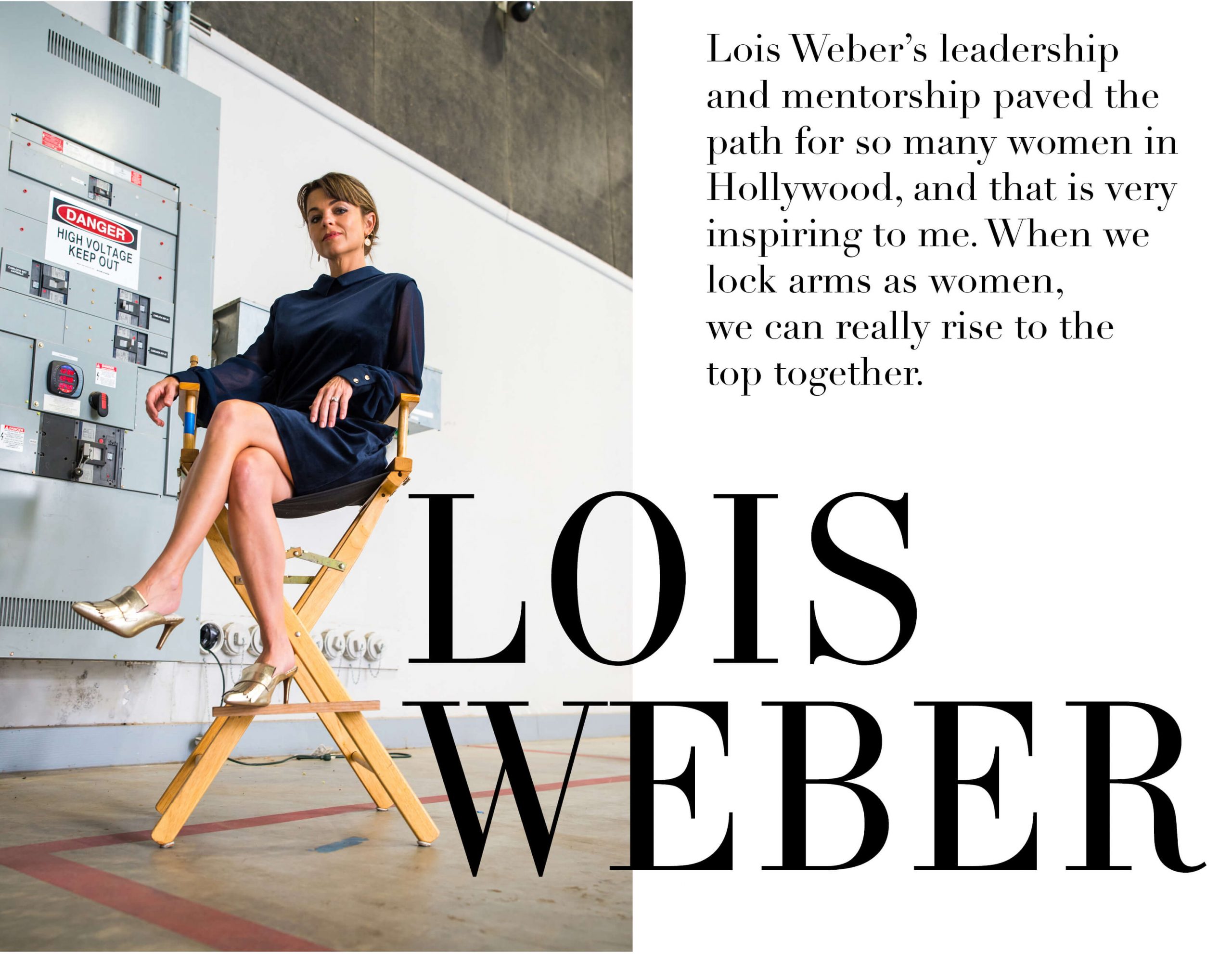 EM: What about Lois Weber did you pull from to inspire your on-camera presence for this issue?

MR: In our preparations for this shoot, the adjectives daring and dignified were two we used to evoke the essence of Lois. These were the characteristics of hers that really spoke to me, and I was channeling them to bring Lois’s spirit into our visual story.

As a woman, it’s not always easy to be daring…to raise your voice and present your thoughts and opinions in a way that is strong and constructive, for fear of things not being interpreted in the way you intended. I am constantly trying to push through that discomfort, so finding that this isn’t anything new inspires me to always keep advocating for what I believe in when it comes to the growth of our industry.

It’s another thing entirely to be dignified while you are being daring. I thought a lot about that, especially when translated into my current career role. When I walk into a room, or onto a stage to discuss or deliver a message, that reminder to always maintain the highest level of dignity and integrity is so important. Once you lose that, what else do you have left? Going forward, daring and dignified are two words I am going to hold onto forever. 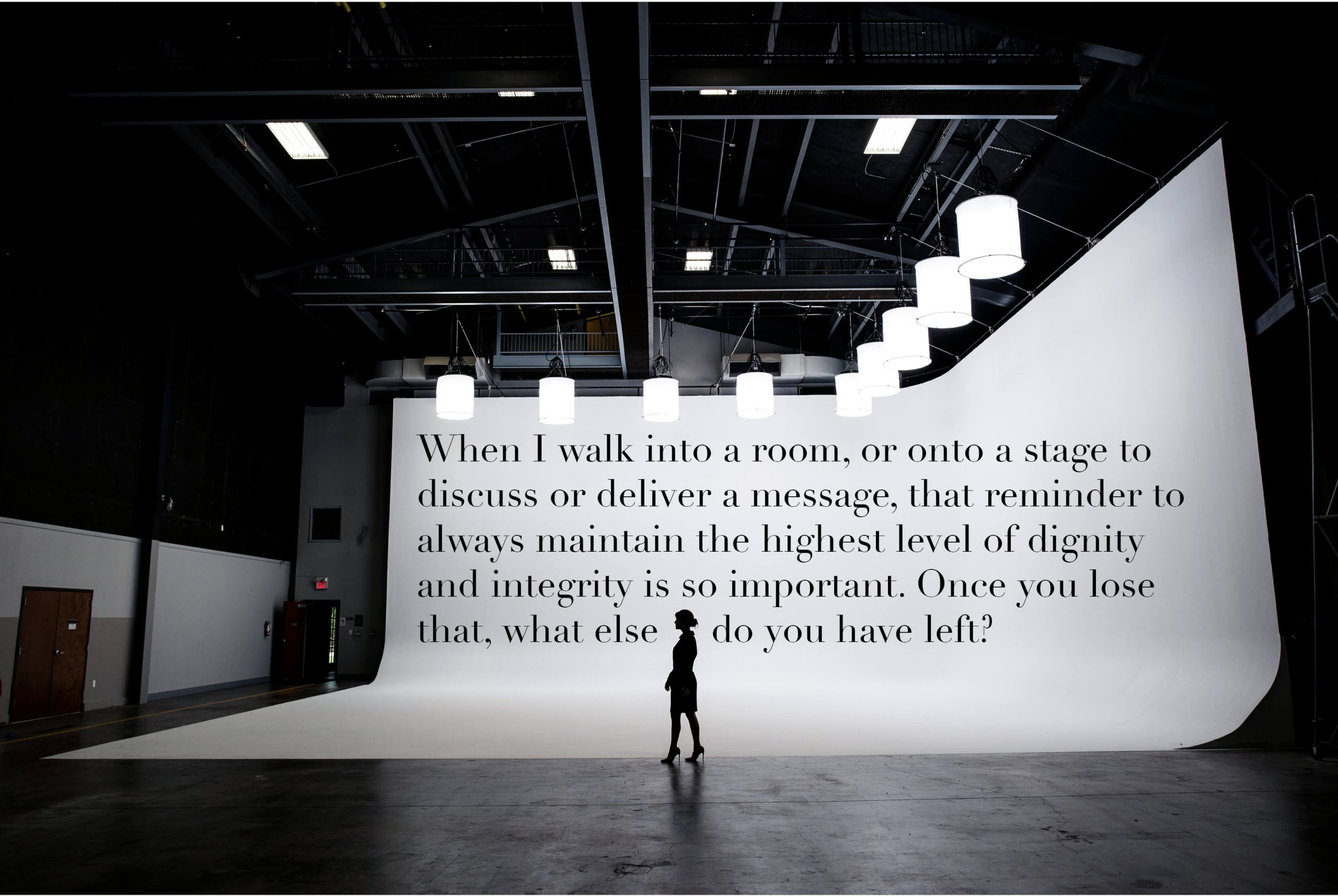 Edited from an interview by Eleanora Morrison.
Connect with Mindy Raymond at NewRepublicStudios.com, on LinkedIn, on Facebook and on Instagram @newrepublicstudios and @mindy_benson.