Women to Watch: A Celebration of Community

The Briscoe Western Art Museum is considered among one of San Antonio’s top cultural organizations and attractions. A modern museum housing art and artifacts reflecting the history and culture of the American West, the tales told inside of its walls are reflective of a bygone era when men and women were pioneering new territory, and developing the towns and cities we call home today.

For Vice President of the growing museum, Liz Jackson, life’s unexpected and challenging circumstances that first rendered her with her own unfamiliar territory to conquer ultimately led her back to San Antonio, where she has stewarded The Briscoe and its relics to a modern audience drawn to the romance of Texan and American Western history. Throughout her personal journey of overcoming setbacks, she held the values of women from history close to her, mustered her grit and grew to the glamour of her position today. Liz Jackson shares her thoughts on her career path, recalls the twists and turns that led her to becoming Vice President of The Briscoe Western Art Museum, and imparts words of wisdom about life that she has learned along the way.

EM: What was your upbringing like, and how did your family history influence your interests in Western culture?
LJ: I was raised in Dallas so I had a very different upbringing from where fate eventually took me.  I grew up in an affluent area of Dallas and absolutely did not have any Western cultural influences besides ‘Frontier Days’ in elementary school.

I did, however, grow up with a strong affinity for the arts, whether it was creating, exploring or supporting them.  My grandmother was a professional artist that got her start in the late 1930s by making illustrations for the fashion pages of Neiman Marcus for their newspaper advertisements. She studied with some of the Dallas Nine such as Otis Dozier, Alexander Hogue and Jerry Bywaters. She went on to become a collectable artist in her own right, painting in impressionist styles reminiscent of Monet, Degas, and Renoir.

As a young girl, I coveted time spent with my grandmother and tried to soak up as much of her teaching and training as possible. We traveled to Europe and New York visiting some of the best art museums and galleries in the world.  I studied art in school and was offered an art scholarship–and probably should have taken it–but I opted to go to the University of Texas, foolishly following my pack of high school friends rather than following my passion.

EM: What ultimately inspired you to pursue a career in the curation of Western Art?
LJ: Upon finishing school, I moved to San Antonio and married one of Hallie Stillwell’s great-grandsons.  I cut my teeth selling office equipment, but was afforded the opportunity to move up in the company into the marketing division. I became inspired by the challenge of meeting and achieving a goal.  I enjoyed the strategy, the implementation, and the creativity needed to ‘make it happen’!

After my children were born, my husband and I moved to West Texas. Quite frankly, it was an effort to simplify our lives in order to save our struggling marriage. This was quite ironic, because years earlier I recall telling a girlfriend, ‘It would be a snow ball’s day in hell before I live out there.’  On my early visits, I could only see the brown, dried-up native grass and the ragged cacti. Everything either stung, bit, poked, or burned. When I arrived in Alpine, Texas, in December of 2000, it was snowing in hell.

Shortly after arriving, our marriage crumbled.  I knew hardly anyone except my in-laws. The thought of being single and raising two young children alone in the middle of nowhere was daunting and my parents begged me to return to Dallas, but something inside of me said no.  I needed to stay and figure it out.

I was fortunate that my former husband’s family at the ranch claimed me in the divorce because as he left, I stayed with our two daughters, who were 2 and 6 at the time. The Stillwell Ranch is located over an hour from the small-town grocery store in Alpine, and a 20 minute drive to the border. It is as remote as it gets in the state of Texas. Or anywhere, for that matter.

I had no idea what I was doing there and it was tempting to fall prey to self-pity and doubt. However, I was reminded of the grit of Hallie Stillwell and the obstacles that she faced.  Driving the soft curves of the roads throughout West Texas with the rugged mountains gave me a lot of time to think, clear the cobwebs and reset my priorities.

It was a total mind shift for me.  I began to really admire the ruggedness of the country and started to soak up its natural beauty.  I stopped looking at everything, including my own life, through a viewfinder, and began looking at the greater picture: the vistas, the jagged peaks, and the purple haziness on top of the mountains framed against the dramatic sunsets and sunrises.

Practically speaking, I needed an income and was fortunate to get involved in the fundraising renovation project for the Museum of the Big Bend in ‘town.’  I was part of the day-to-day operations and went on to lead the museum as director.  My biggest accomplishment was growing the annual Trappings of Texas Western art and gear exhibition and sale.  It was a great challenge but it gave me the opportunity to work professionally in an art field. So although I did not pursue a career in Western art, once I fell into it, it became natural.  With a new and fresh start, I embraced my role in being part of preserving the Western heritage because although I was not born to it, my circumstances allowed me to re-focus how I looked at my own life.  I valued the determination, discipline, respect, hard work and grit that a pioneer woman rancher born in 1897 needed to survive.  I love lost causes, survivor stories, and challenges and I found my identity in these women’s stories.

Once I settled into the West Texas lifestyle, I went on to find the love of my life, Lance Jackson–a lawman on the border with a larger than life personality, a deep Texas draw, and a personality as wide as the Llano Estacado. He comes from an iconic Western family with legendary Texas Ranger Joaquin as his dad.  Marrying into this family was every bit as fascinating as marrying into the Stillwell family.

I think that it is ironic that I am now related to two very famous, iconic Texas legends through marriage–Hallie Stillwell and Joaquin Jackson. Fun fact: both have been featured on the covers of Texas Monthly. I am never lacking for a good story to share.  After 17 years of living in West Texas, the phone rang with the opportunity to come to The Briscoe in San Antonio. My husband Lance retired after 25 years in the US Border Patrol, and I came to San Antonio to serve as Vice President for the museum.

EM: Looking five years into the future, what is your vision for the Briscoe Western Art Museum?
LJ: All museums must be concerned with the prediction of the future as much as with the preservation of the past; therefore, as museum professionals, I feel we must stake a claim on what will matter in the future.  As we move forward, I feel it will be of paramount importance to remain focused on the enduring, cultural values left to us by the cowboy, vaquero, and Native American ways of life: courage, strength of character or ‘grit’, humility, authenticity, respect and care for our land.  We must not forget where we came from.

The Briscoe Western Art Museum is experiencing a dramatic trajectory in growth and it is an exciting time for us. We are busting at the seams in every facet. Literally, we are running out of office space. We are rapidly expanding exhibitions and programming which has led to greater visitation and visibility. I have been absolutely delighted with the national media response, especially from the prestigious fine art and Western art publications.

Strategically, we are establishing ourselves in the San Antonio and South Texas region as one of the cultural pillars for the arts. Through our annual Night of Artists exhibition and sale, we have positioned ourselves as one of the top destinations for purchasing contemporary Western art, with 2019 gross sales of $2.6 million.  It was somewhat surreal last year, because we set a very lofty goal, and exponentially exceeding it blew us away.  I could not have been prouder to work with our staff and board–they truly are the creme de la creme.

EM: What upcoming programming and events at The Briscoe are you most excited about, and how can people experience them?
LJ: As we move into the future, our exhibitions and gallery spaces will continue to represent the values mentioned above, but we will also embrace the values of the present and future: diversity, collaboration and justice.

We are also so excited about our newest exhibit, Art & The Animal, on view September 20th through January 5th in the Jack Guenther Pavilion. We have a lot of fun events in conjunction with the exhibit and hope everyone will join us. More information on the exhibit can be found HERE. 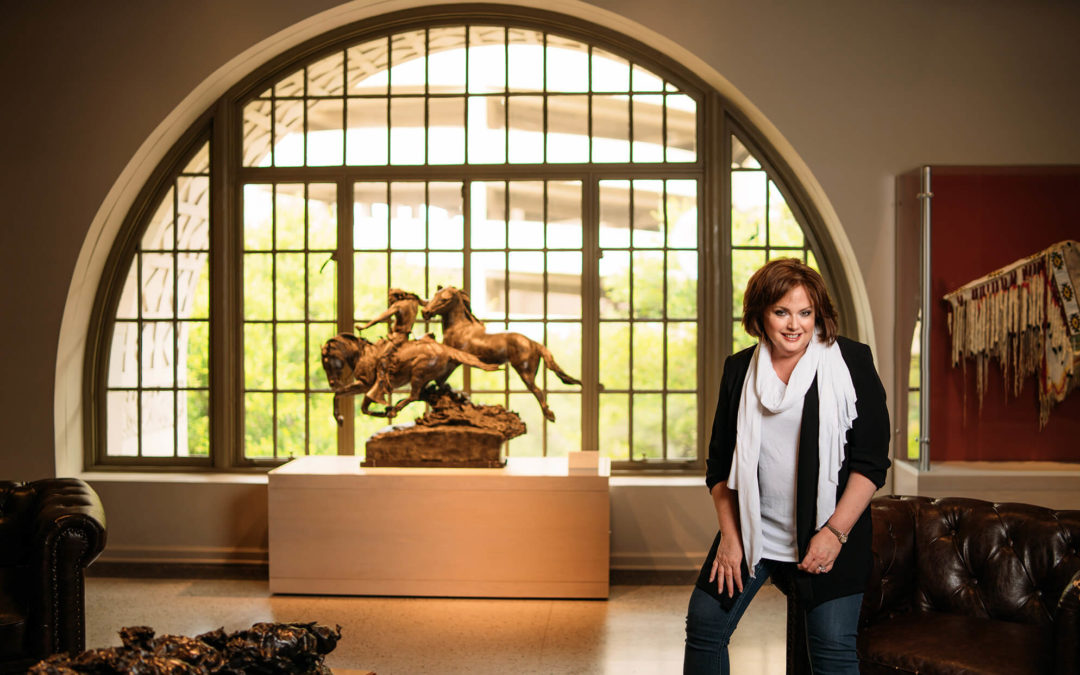 EM: How do you think the art world in San Antonio is going to continue to grow and evolve in the next decade?
LJ: As one of the state’s oldest and largest cities, San Antonio has long been heralded for preserving our heritage historically, architecturally and culturally.  I lived in San Antonio from 1990-2000. Returning in 2017 on the eve of the city’s tricentennial celebration, it was exciting to see the expanded River Walk to include the Museum and Mission Reach. During my time in West Texas, there had been tremendous growth in our cultural attractions such as the Witte Museum, the McNay Art Museum, and SAMA (San Antonio Museum of Art). New cultural establishments included Blue Star Contemporary, the Tobin Center for the Performing Arts, and many others. San Antonio is rapidly developing, considered one of the fastest growing cities in the U.S., and with that comes a revitalization of our urban areas that began with the redevelopment of the Pearl brewery.  On the horizon is the expansion of Alamo Plaza, the massive development project at Hemisfair Tower, just to name a few. Our skyline is literally changing daily.

According to a Forbes article from last summer, there are 66 people moving to San Antonio each day, on average.  If we want to remain relevant and meet the demanding needs of our growing community, and also to provide the experience that meets the expectations of our visitors, we at The Briscoe are going to have to grow as well.

This means that as preservers of culture, arts and history we must continue to hold on to our values, while at the same time also stake a claim on what will matter in the future.

This feature was (Em)Powered by The Briscoe Western Art Museum.

Edited from an interview by Eleanora Morrison.

Wendy Bowman Butler In The Studio with Cruz Ortiz