How did you and Riamond meet?

Riamond (pronounced like diamond, but with an R) and I met while working together for a company in the bar business.  We both started around the same time and worked together as bartenders.  We didn’t work similar shifts, so we didn’t have the chance to speak much at the beginning.  We were both promoted to management at the same time, which is then allowed us to get to know each other better.

Why did Riamond stand out to you as the person you wanted to marry?

Riamond was different in every way than anyone I knew.  She has a strong and independent character, which I love, and is incredibly smart.  Although born in the U.S., she grew up in Japan and around a different culture.  I also was raised around non-U.S. culture.  Her parents were both born in the Philippines, and my parents are from Mexico.  Almost immediately there was a special connection between us.

How did you propose?

We are both musicians and were fortunate enough to attend the New Year’s concert in Vienna, Austria.  I had the ring in my pocket the entire night (which is difficult to hide while wearing a tux).  After the performance, we initially had plans to celebrate the new year at a nightclub where we had made reservations.  However, because it was Europe, the nightclub became too smokey and we had no choice but to leave before midnight.  This left us out in the street party (it was like the European version of Times Square in New York).  So, at midnight, as fireworks were blasting and everyone was cheering, I bent down on one knee.

Why did you choose custom clothing for your wedding day?

During the months of our event planning, we both agreed that we wanted to wed in a beach setting.  Something on a cliff overlooking the ocean, but not with toes in the sand.  Why?  Because we still wanted to dress our best.  Full formal wedding attire, and of course the perfect wedding suit. When I saw how excited Riamond was when she found her wedding dress, I knew I had to look my best if I wanted to even try to be on the same level as her for our big day.

Why did you choose Limatus Bespoke?

A friend recommended I meet with Limatus. I thought, maybe I’ll see if there is anything special about them.  There are so many options out there from department stores, suit warehouses or even online.  I decided to use them as a starting point. After spending half an hour with their lead designer (Tessa), I didn’t look anywhere else.

What was your favorite part of The Bespoke Experience?

Everything.  The experience from start to finish is top shelf…from your very first meeting to the suit pick up!  The Limatus team actually listens to what you want.  If you have an image in your head, or on your phone like I did, they will go the distance to make your vision come to life. The communication was great and Tessa kept me in the loop throughout the whole experience.  This is your wedding and every aspect is something to cherish and remember, including selecting your suit.

Why did your groomsmen party decide to get matching suits?

My best man accompanied me on my suit selecting and planning day. Let’s just say ‘jealous’ (but happy for me) doesn’t even begin to explain how he felt after we left the showroom.  Thinking it would be impossible to get the rest of the groomsmen to commit to a custom suit, we began to think of options. The first of which was to just ask Limatus Bespoke if they could help me make this happen for my groomsmen, and they did. It was a no-brainer and all six of my groomsmen now own a beautiful custom suit.  They have each worn it again for other events and still love the look and how they feel wearing it. 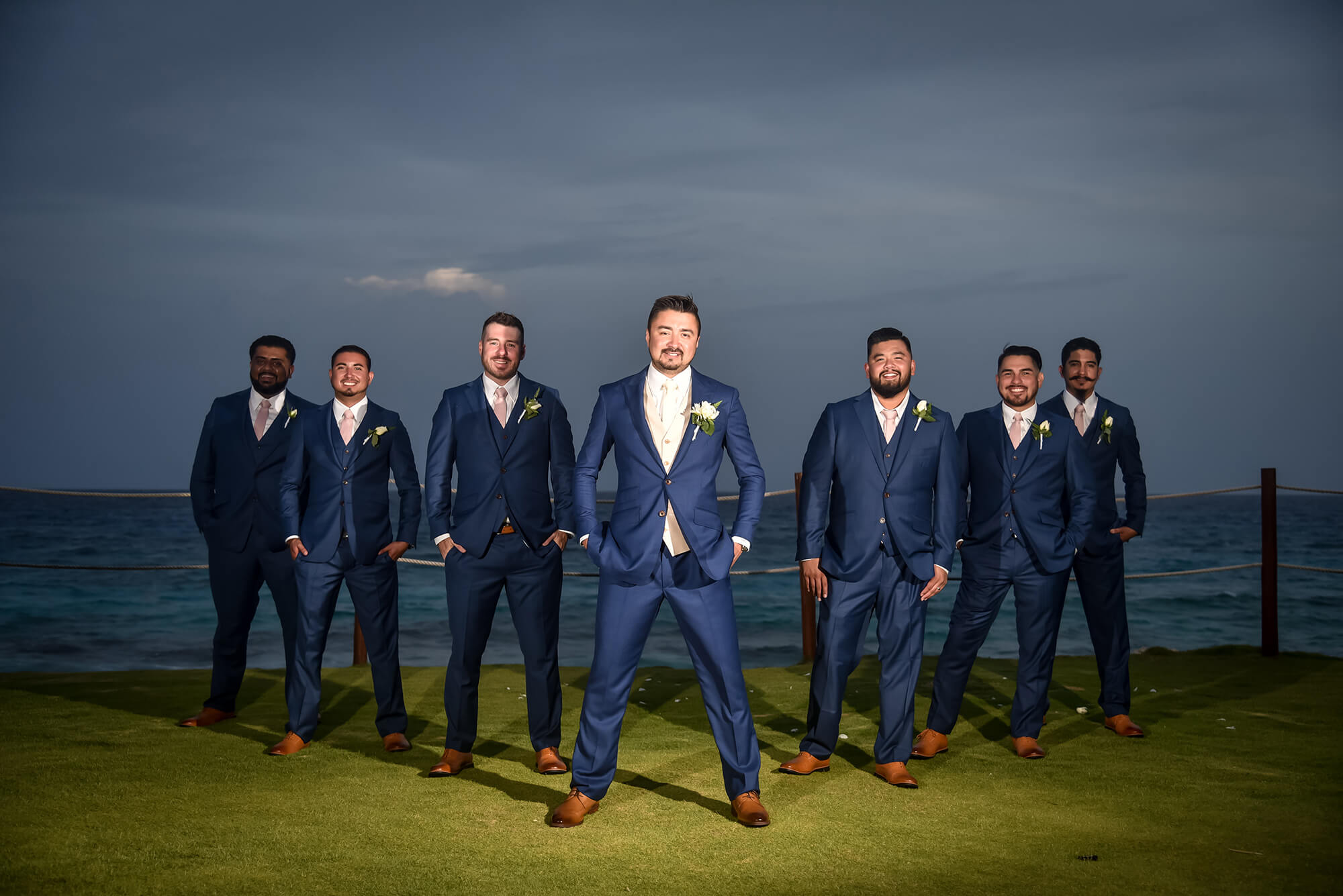 What special touches did you include in your suit design and why?

I chose every detail, from the look and feel of the materials used, to the colors of the buttons and the custom interior lining.  It was me and six groomsmen, totaling seven.  We decided on seven different linings, which made for a great photo during the wedding reception.

How did your Limatus clothes make you feel on your wedding day?

Like I’ve never felt before!  Your wedding day is such a special occasion.  What you wear needs to match that and be memorable.  My wife could not stop staring at me and that felt amazing.  She was the most beautiful bride I had ever seen, and what I wore next to her when we said I do mattered.