Meet The Illustrator Behind Our December Cover, Taylor Dolan

For world-traveling, award-winning film Director and Producer Doree Simon, telling visual stories to enact social change has always been a part of her life plan. Doree and I met in 2010 in a TV production class at NYU. We were project partners in class, and became close friends throughout the semester while we worked on a treatment pitch for our fictional TV series that was MTV’s The Real World-esque, documenting stories about students traveling abroad and the life lessons they would learn on their adventures.

Looking back on those years, Doree’s professional pursuits and successes come as no surprise, even though the medium through which we consume mass media has changed a bit since then. Throughout our almost-decade of friendship, I wave watched Doree’s social media accounts in awe, as she has traveled to (literally) the ends of the Earth and everywhere in between, telling stories as Director of Production for Matador Network, the world’s largest independent digital travel publisher.

Her unquenchable thirst for learning about the cultures and people of the world whose upbringings and backgrounds are a stark contrast to her Pittsburgh, Pennsylvanian upbringing is inspiring, and her sensitive approach to being the voice of others’ representation through her work is evident from an observer and content consumer on the other side of the lens. She shares on her background, her craft, and the recent life events that have shaped her forever–both personally and creatively.

EM: Did you always know you wanted to be a producer? How did you get your start in media?
DS: I have always gravitated toward visual storytelling as a career path, but I didn’t always know that I wanted to be a producer. I had assumed that producers handle the “business” side of film and that producing would be a good fit for me, because although I am creatively driven, I felt that my personality and skillsets were better suited for “business.” It wasn’t until I sat down in Sharon Badal’s Business of Producing class at NYU (with you, Ellie!) that I began to understand how creative producing is, and how perfect it is for me.

I got my start through working really hard in school, doing multiple internships and saying yes to every project I came in contact with until I had to start saying no. I know that sounds intense, but I chose the freelance life. I didn’t want to start in an office and work my way up in one company. I wanted to play the field, work on a different project every month and create opportunities to work with different types of producers and crew members, all of whom I learned from in different ways.

I went to NYU for producing, and while I was there I interned at various production companies, where I worked on projects including a feature documentary, corporate advertising, scripted Hollywood films and the Tribeca Film Festival. By the end of my internships and school, I had a good sense that I wanted my work to mean something. I wanted to have a voice in the messaging, and I wanted to have freedom in my schedule to build a balanced lifestyle. Also, I knew that I never (again) wanted my job to entail following talent around all day as their personal fetchers. Eventually, I found that my skillsets, passions and talents were best suited for independent filmmaking and travel content, all with a focus on social impact storytelling and that’s what I’ve pursued.

EM: What are your favorite types of films to make, and why?
DS: I am the kind of person who cannot stand to see injustice without trying to do something about it, and I also believe in the power of storytelling as a form of education and inspiration. Because of this, my favorite types of films to make are social impact films, which I would define as stories that hit on real issues in an effort to open up an audience’s eyes to issues. Films like this can build bridges between strangers, shift the moral compass of society and actually make change in the world.

They don’t have to be in the form of a documentary. I produced a short scripted film about climate change that I also categorize as social impact. Even the way you tell a story can be socially impactful: for example, the musical Hamilton is a true story about a bunch of white men in history, and has a cast of mostly people-of-color: that is social impact storytelling–using art as a platform for inclusion, diversity and progress. Anytime a director makes a statement for social change–maybe it?s talking about mental illness, gun control, women’s rights, equality for same-sex couples–that is social impact storytelling. At the end of the day, media is impactful. It is one of the most influential factors in society. And as a filmmaker, I have a platform and an opportunity to be a part of that conversation.

We made a film about women’s empowerment efforts in Mumbai, focusing on girls who were born or trafficked into the red-light area and are now transcending their circumstances to become agents of social change through an NGO called Kranti. We spent a day-in-the-life-of Rani, a 17-year-old daughter of a sex worker mother and a father who died from HIV/AIDS. But instead of doing sex work, Rani is working to be a leader in her community to show other girls that they’re in control of their bodies and their futures.

The shoot itself was crazy because Mumbai is wildly overstimulating and we were dealing with really heavy subject matter, but the girls invited us into their world and showed us so much love and vulnerability. We spent the better part of ten days at their shelter home, or following them around all over Mumbai. I left with such a better understanding of their culture and world because they opened themselves up with such courage. I am also really proud of the film we created together called, ‘In Her Shoes: India.’

EM: You have been very public about the loss of your brother over the past few years. How has the event of his passing changed you as a creator and as a storyteller?DS: Experiencing my brother’s death was an education in life and loss. It made me a more compassionate, thoughtful, aware, loving, expressive, patient and mindful person. And it also made me angry, bitter, unsettled, sad, paranoid, and passionate about keeping him alive despite his death.
To be honest, in the first few months after my brother died, I felt very creative but not in my typical, problem-solving producer ways. I had previously been focusing on social media and creating my own travel content and documentaries, and after losing him, all of that seemed like a terrible place to put my energy. In hindsight, that probably came from not feeling okay talking about anything at all if I wasn’t also talking about him. He was such a light, and the world became so much darker without him.

So I started drawing and painting and singing and just enjoying the creative energy without the pressure of putting it toward my career, or anything at all. Creating to create is pretty profound if you’re not used to it. This didn’t last forever, but it sparked something new inside me: a definite understanding of the creative, purposeful, important voice I have inside, and the need to use it. Of course, for me, that means telling my brother’s story–which I’m currently working on doing in the form of a film.

EM: What does the term enlightenment mean for you, and how do you work toward it in your daily life?
DS: For me, enlightenment is the balance of being present and living with mindfulness, and the practical requirement of living day to day. It’s finding a way to not sweat the small stuff, while keeping your eyes on your bigger goals and living fully. In short, it’s being here and now. The first time I ever truly felt it was when my brother died and nothing else mattered. I try to tap back into that perspective often because in a weird way, it’s the calmest I’ve ever been. It was acceptance over my lack of control in this life, and that was freeing.

To do that, I’ve started to introduce everything I know to do, and to explore new things too. I meditate daily. That has been huge for me. I also try to sweat or move my body, and to be forgiving of myself if ever I decide not to do this. I go outside, I do breath work, I journal, I go to therapy, I strive for a positive work/life balance with life and family being the priority. I don’t work at night. I don’t look at screens late at night. I eat well. Again, I go easy on myself if I decide not to do this. Basically, I make this effort a number one priority.

Some days are really hard. Most days are really hard. Because even doing all of the stuff I just listed could fill a day, but you also have to shower, do laundry, pay bills, and (of course) work. I used to run away to escape the hard stuff – mostly through travel or boyfriends or movies and TV or any other form of distraction–and now, as my therapist says, I am “sitting in my sh**” and dealing with it. That’s not to say that I feel enlightened; please! I will be lucky if I get close to true enlightenment in my lifetime. But I am trying to be present every day.

EM: If you could offer one piece of advice to young women pursuing careers in media, what would it be?
DS: Don’t wait for someone to ask for your opinion; if you have something to say, say it. Your voice matters and the world NEEDS to hear it. I think the most eye-opening quote I’ve heard in my career was by an Indian politician named Priya Dutt, who I came across when I was researching sex workers’ rights for ‘In Her Shoes.’ She said, “Women put their hand up for a role when they are 90% ready. Men raise their hand when they are 50% ready.” I don’t think this is a bad thing, but I think it’s important for us to realize. It resonated with me and I keep it in mind all of the time now.

While the attitude toward women in media, especially the film industry, has changed drastically, the number of female directors still pales in comparison to the number of males. This means that a majority of the media we are consuming is still made by men, which is why I believe it is so important for women to have an equal voice in this conversation. 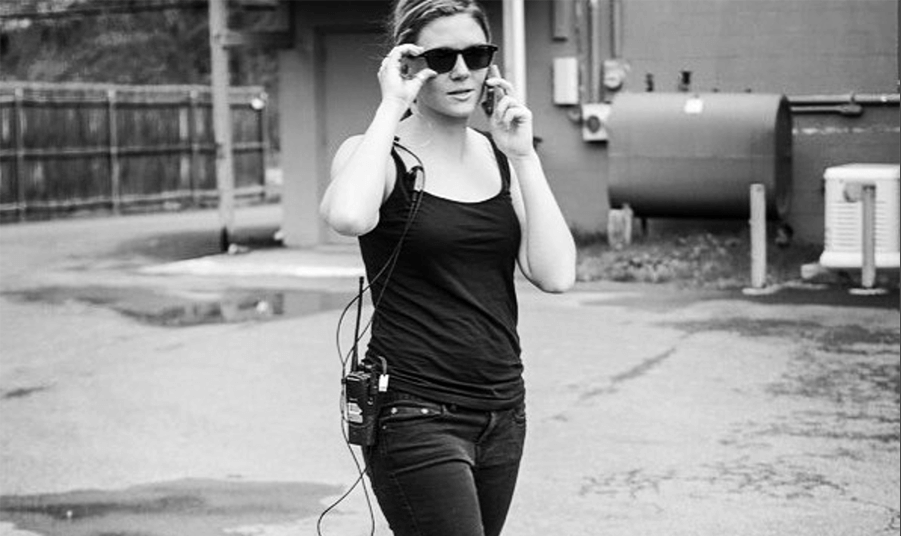 Connect with Doree Simon at DoreeSimon.com, and on Instagram at @doreesimon.

Edited from an interview by Eleanora Morrison.