September has has always been a month I associate with new beginnings. With the return from summer and the anticipation of a fresh season, the breezes that bring fall cool the air and the winds of change whirl with anticipation of what unknown adventures are to come. For ELEANORA, September brings a new year. Our first published issue was September 2018, and we have collectively taken one trip around the sun as creators, collaborators and contributors, together with you–our reader.

In our first year, nearly 100 women agreed to be featured in editorial. To make that possible, we were given the support of almost 100 companies and organizations who believe in our mission to empower the voices of women. To create our larger storytelling productions about the legacies of women from history, we collaborated with 50 San Antonio artists over the course of one year, whose unconditional support and dedicated collaboration brought the legacies Carmel Snow, Sor Juana Ines de la Cruz, Ada Lovelace and Lois Weber out of history books and into real life.

We have heard from a symphony of women–over 40 voices have contributed to this platform on a wide range of lifestyle topics, writing in from various cities across Texas, from Los Angeles, San Diego, Boise, Salt Lake City, Phoenix, Washington D.C., New York, Boston, even Mexico City, Mexico, London, England and Moscow, Russia. Our readership included women (and men) in these cities and beyond, and our messages organically reached tens of thousands of diverse and multi-generational readers regionally, nationally and internationally.

I reflect purely to express a most sincere and heartfelt thank you to every single person (there are hundreds of you) whose efforts have played any role, large or small, in bringing us to this point, celebrating a Magazine of the Year nomination from the San Antonio community, and exciting plans developing for expansion in our second trip around the sun.

Personally speaking, ELEANORA has paved a path for my journey that I used to imagine might be possible, but only in my wildest dreams. There is a special magic that was sparked by the daily work and passion that went into developing this platform to this point, and now here I sit in Hollywood looking out at the citrus trees, refreshed by the brisk morning air, dumbfounded by the fact that I have been delivered with tender care to Los Angeles, and literally dropped by the Universe into what feels like an entirely new life…yet, nothing has ever felt more right.

It is inevitable that with new beginnings also come certain elements of change. As an opportunistic optimist at my core, I have always embraced that. I usually feel renewed by discovering the unknown rather than threatened by it. It doesn’t mean I’m not scared, though. The contrary is almost always the case. Before packing my suitcases for this partial move to L.A., I breathed through the overwhelm (and several waves of panic attacks) of anticipatory fear, wondering if this decision I was making was the right one, but I went anyway. I’ve been lucky during this transition to find that the inner peace I have felt in making this stretch has been a reward that has already far outweighed the risk of uncertainty.

Idealistic visions aside, the grind of growing a digital media platform is an all-hands-on-deck, tireless job. Much like the public performance of any artist or athlete that appears glamorous to the outside world, the behind-the-scenes preparation for the spotlight is unglamorous, uncomfortable, challenging, grueling and requires intense discipline and undistracted focus. Creating this project has been all of those things–it is no different. For that reason alone, I feel more prepared than ever to be where I’ve landed.

Looking forward to this new beginning, I made my usual seasonal vision board for inspiration shortly after I arrived here in L.A. I hand-cut a collage of various editorial scraps from the magazines I frequently read, just letting my instinct guide what to include. I cut what I feel, not what I think. Somehow, weeks and months later the curated phrases and images chosen by my subconscious end up manifesting and providing clarity of vision in my work. The phrase that has most stuck out from this bulletin board, repeating over and over in my mind whispering its guidance for weeks in this creative season is, the medium is the message. The second most prominent phrase on the board is namesake.

After much reflection and discussion with those closest to me, including Melissa–my founding partner in this platform–I have realized that I want to add much more conversational content to ELEANORA, and begin to shift away from content that is mostly presentational. If the medium truly is the message, then the root of this redirection is simple: the mere essence of this platform (whose namesake is my great-grandmother, Eleanora Benedetta Lavieri), is to empower and support the women in my daily life the way she did in hers, and to lean into that personalized, authentic voice that makes women feel as special as how my Nonnie and the matriarchs within her legacy have made everyone feel when seated around (or dancing on) their kitchen tables.

We will be shifting away from monthly concept issues toward sharing more frequent, in-the-moment, and sometimes informal content that documents the experiences of my life between Los Angeles, San Antonio (and wherever else the wind might take me) and the real women in it. These personal, in-the-moment and candid conversations that have provided such a source of support and empowerment on my own journey have led me to realize that introspective reflections I’ve been relegating to my personal journal during dawn hours this past year should be shared publicly to help all of the women who land on this site in search of a destination for happy, inspiring stories to read and watch. With this shift in voice and content to a more personal tone, our women from history pieces that originally inspired this platform will become larger production projects in collaboration with even more creators, and they will be released as special features fewer times per year.

In search of my monthly inspiration to visually depict the theming of our issues (now evergreen content from this point forward), I came across these digital collage images on Pinterest when I was pulling for my board I titled, the medium is the message. These collage works are a medium, and they each send a strong message. If a picture says a thousand words, the below curated digital collage of the “yearbook” cover of ELEANORA’s first year in review, which I’m calling “Volume 1” says nearly one million words. Each tiny picture represents dozens of ideas, hundreds of helping hands, thousands of words, and so much more…an entire community of women online and in-person who have come together to share stories that have meant something to them. This, to me, brings more fulfillment and significance than anything else our current culture has taught us to value. 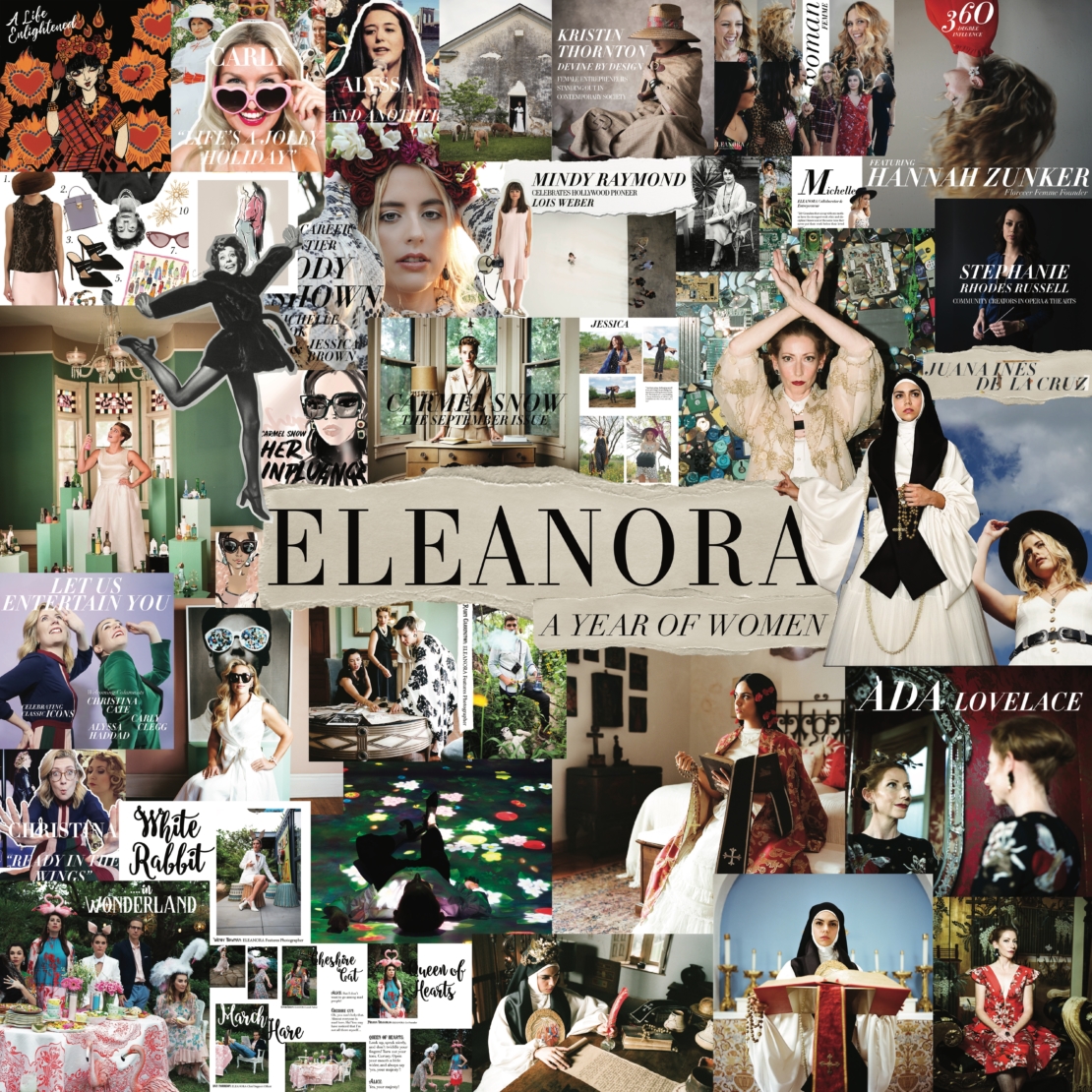 To our collaborators and contributors: what a joy and honor it has been to create alongside all of you in our first year, and to share your inspired work with our readership. I cannot wait to discover what this new beginning brings in year number two.