Apprehension: the natural next step after deciding to commit to  a calling, no matter what it is. It’s that feeling of questioning after taking steps toward doing something big; the moment when self-doubt and a tinge of fear kick in as a mechanism of self-defense, but you have to dig your heels in and push forward at all costs anyway. That’s the space from which our November Issue was created, and it was appropriately parallel to the life story of Juana Inés de la Cruz, our “S.H.E Is” historical cover feature.

We shot Juana Inés on a romantically dreary, drizzly day in early September at a private residence here in San Antonio, only six days after we launched ELEANORA. Melissa and I hadn’t slept in weeks, and the only thing that was keeping us standing was our bodies’ adrenaline drip and a heaping dose of determination. Somehow, mixed with the hollow calm of exhaustion and just enough delirium to feed our wildest imaginations, we managed to curate Juana’s story, and Giovanna DiZurita brought her spirit to life before our very eyes, delivering such moving performances in each scene that by the time we made it to the final one we were sobbing (silently) with her.

Shooting a “S.H.E Is” feature is a full production. Each one has taken twelve hours on set, not counting the weeks of preparation for the creative minds involved in curating the looks and experience day-of. Originally, we were attempting to tell the story of Juana Inés de la Cruz in a more literal sense, and use supplemental “characters” I had imagined, loosely based on research, to provide context in her narrative. After sitting on Rahm Carrington’s breathtaking images for over a month, we had just enough time removed from the visuals to understand the real story angle when we returned to them again, and ultimately what we feel Juana was trying to tell us through Giovanna on the day of the shoot. As out there as it might sound, these women from the past really do speak to us through the woman who portrays their story for ELEANORA, and somehow everything always ends up aligning in ways Melissa and I think to be impossible. 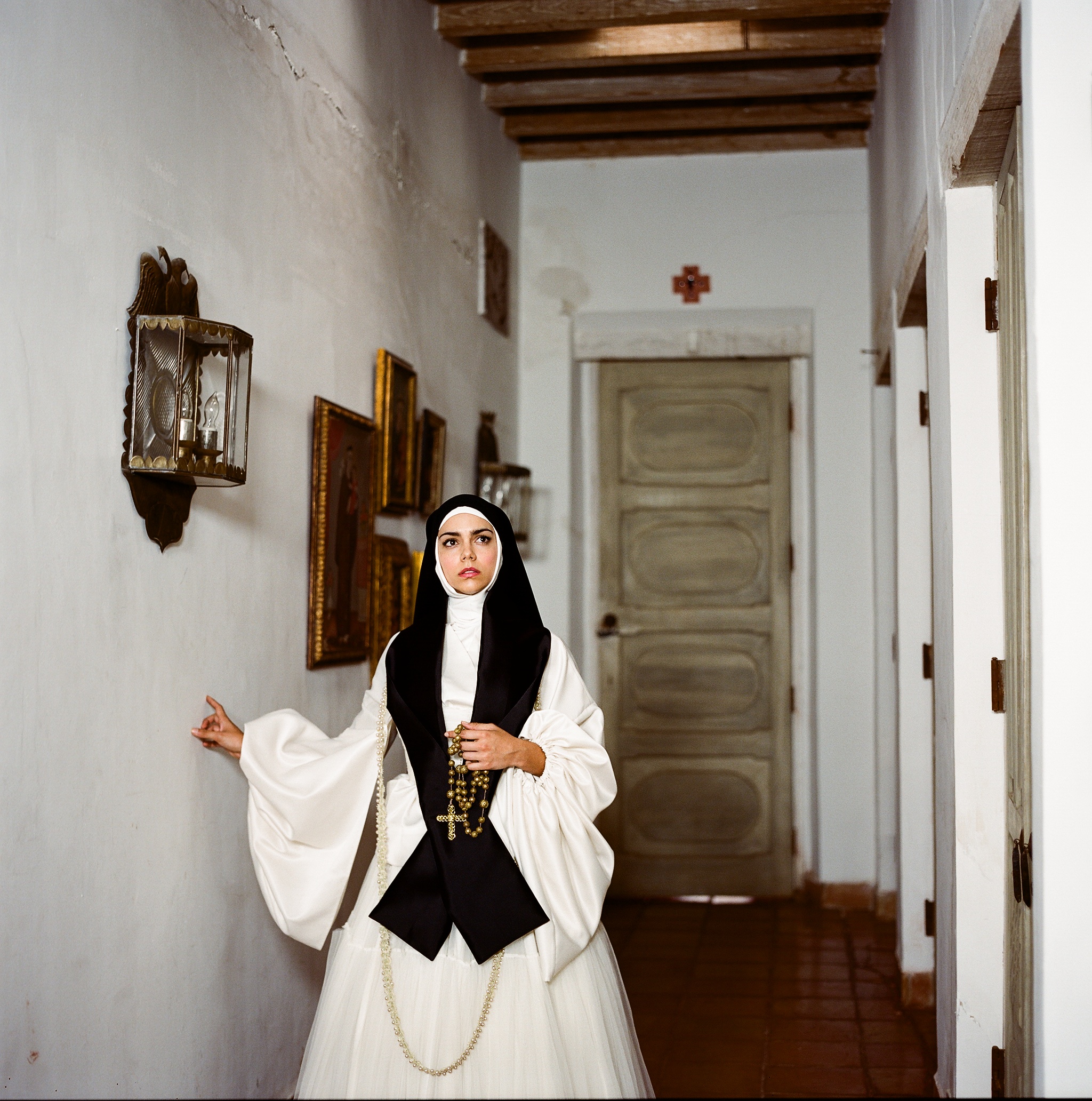 Juana chose to enter a convent and become a nun in order to pursue the freedom of learning that she wouldn’t have been allowed otherwise. She chose a life of solitude and studies over a life of marriage and family, because in her time swearing away tradition for the convent was the only way to achieve what she believed was her true calling: reading, writing, philosophizing and inspiring the current and future generations of women to realize they were not lesser than men and they deserved more out of life. She committed to the woman she was at all costs, and the timelessness of her story is still extremely relevant today, as it speaks to any and all people–no matter the age or gender identity–who can relate to her vocation, to her trials, to her messages, to her ideals and to her fate. Of course, she was scorned and horribly punished for documenting her beliefs on gender equality, as they questioned the Catholic church and Mexico’s Baroque-era social structures of the early 1600’s, and her personal library (which was everything to her) was burned in attempt to silence her.

Shooting this scene was a deeply emotional experience. For the few of us who were present in the room to witness it–hiding quietly, so that Giovanna could perform without distraction–we were extremely moved, as it was an intense reminder of the rawness of human vulnerability. Originally from Mexico City and now a visual artist in San Antonio, Giovanna had admired Juana Inés and related to her story since she was a young girl; that connection showed on camera, and it was powerful. What Melissa and I ultimately realized is that Juana’s story is our story. Juana’s story is Giovanna’s story. Juana’s story is Angelina’s, Lisa’s, Jade’s, and Rahm’s stories. Juana’s story is everyone’s story who has ever had the courage to pursue something that their internal voices have whispered them to wander toward, regardless of the criticisms of others or the trials of life that challenge us along the way.

In our society, we admire and aspire to be like those who are creating, making, and who have achieved notoriety because of it. These are the people who have broken the mold: who have decided to drown out what everyone else tells them is best for them, and walk forward with conviction to create a life they love. However, those who are on this path will tell you that it does not come without sacrifice. For some, that sacrifice is family. For others, that sacrifice is financial stability. For all, it is the connection to something greater than ourselves that fuels our inner fire.

When the fire gets hot and others try to burn you with it (which, for people living in alignment is par for the course), will you let it defeat you, or will you choose to learn from it and refuel even stronger? Juana Inés was nicknamed the ‘Mexican Phoenix’ because her work and legacy transcended, even though her physical books were burned to ashes. As we all continue to discover the why for our own lives, ELEANORA challenges you to be a voice that lifts others around you to better others, and no matter what–to always rise.

Ada Lovelace and the Year of ‘I Can’