Grit & glamour: these are two traits that have always inspired me. I am especially moved when a woman embodies both of these characteristics in pursuit of her passions and ends up pioneering an industry,  recognizing and training the potential in her peers to pull them up the ladder with her, and ultimately leaving a legacy that lays the groundwork for others to thrive centuries beyond her time.

Lois Weber (1879-1939) was one of these extraordinary women, and her creative career inspired the theming, styling and stories inside of our June Issue. A pioneer of Early Hollywood in the silent film era, Weber was once considered one of the most prolific makers of her time. A true auteur, she wrote, produced, directed and starred in many of her moving pictures, owned a production studio, and used her medium of influence to push cultural boundaries by addressing social issues with a daring, yet always dignified approach to her work.

Unfortunately, when moving pictures became talkies and the roaring twenties brought the re-masculinization of Hollywood to the forefront of its studio culture, Lois Weber was nearly written out of industry history. Her influence, however, is making its resurgence in modern-day headlines during the age of #MeToo and #TimesUp.

When thinking about a woman today whose career shared many parallels to Weber’s, despite the century between their prime working years and a drastically different technological landscape, President of New Republic Studios Mindy Raymond in Bastrop, Texas was a perfect match for our feature.

As a nod to the moving picture era, we engineered a flipbook-like magazine cover, telling the visual story of Mindy Raymond’s daily life at New Republic Studios, in a mini moving cover story, “Life On Her Lot.”

Contrary to what the assumption may be of what things where really like in the pioneer days of Early Hollywood, Lois Weber was revered and admired by the film industry and in the press, and was paid very well during her prime career years. She worked with her husband Phillips Smalley, and the production duo was considered to be one of Hollywood’s original power couples.

Weber led teams of men, and also brought women into the creative fold and up the corporate studio ladder with her. She served as the Mayor of Studio City, organized women’s industry groups, and advocated for educating women about careers behind the camera as writers, directors and producers, as much as she discovered women and gave them their first breaks in front of the camera.

According to the book I read in my research of Weber’s life, Lois Weber In Early Hollywood by Shelley Stamp, something shifted in American culture when the 1920s entered stage right, and women were seen as merely the dazzling on-screen accessories for leading male characters, and it took industry culture until recent years to bring awareness back to the things Weber was advocating for in Hollywood’s early years. 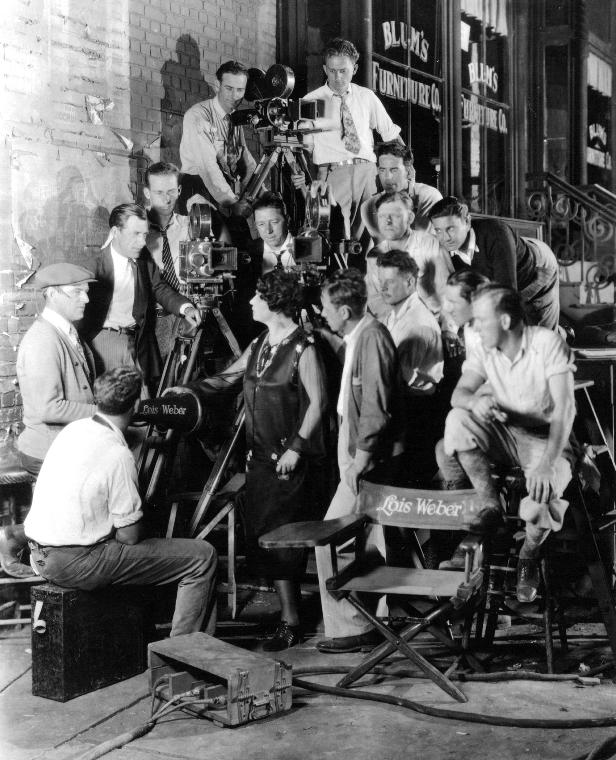 What makes Mindy Raymond so spectacular in today’s industry landscape is that she has worked in front of the camera, behind the camera, as an advocate for the growth of the film industry in Texas, as a mentor for women in the industry, and now serves as President of studios that sit on 200-acres in rural South-Central Texas, and she and her team are building the dreams for the future from the ground-up, just like Hollywood’s pioneers did in Los Angeles in the early 1900s.

With our highly advanced technological world and Austin blossoming as an epicenter of invention (San Antonio’s tech scene is sprouting up healthily too, just down the road), Mindy’s visions and goals for the growth of the studio to become an incubator for immersive entertainment experiences that shape the future of entertainment and content creation will, no doubt, establish it as an industry innovator and draw all kinds of elevated production work to Texas that adds to the studio’s already diverse roster of film and television projects.

Behind the scenes on production day with Eleanora Morrison. Video by Cruz Garcia of New Republic Studios.

Behind the scenes on production day with Mindy Raymond. Video by Cruz Garcia of New Republic Studios.

The past provides endless teachable moments for the future if we choose to pay attention to its parallel messages. As inspiring as Lois Weber’s legacy is, even with all of her creative efforts and her highly respected servant leadership to help establish an industry, she was still written out of history. Instead of Lois Weber’s name being revered throughout the century that followed her era, it was Charlie Chaplin’s. Lois Weber, however, made more films. As women, if we continue to fight for one another’s stories and work together to support each other’s efforts in daringly dignified ways, perhaps history (which has a curious way of repeating itself) might just be rewritten for good.

Nostalgia Roundup: These Vintage Slim Aarons Visuals Are Sure To Uplift Your Quarantine