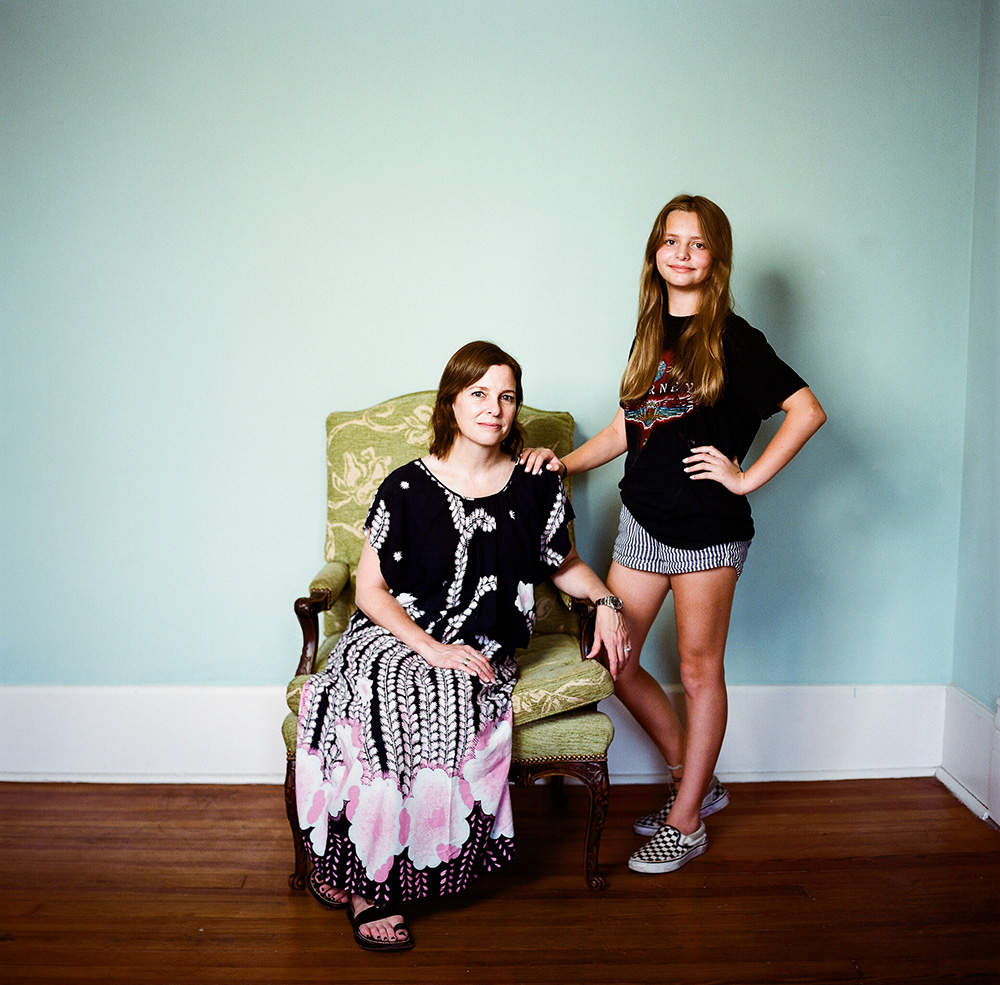 Designer and Creative Leader Sarah Herr On Her King William Home Ownership Story, and How It Became The Historic Backdrop for Our Carmel Snow-Inspired Cover Shoot

I walked in through the old, glass-paneled, front double doors and into the expansive center hall, trailed by my two daughters. I had explained to them the importance of keeping a poker face when house shopping, but I was having a hard time following my own advice. Our path to this house was a strange one and if I were one to believe in signs, there were a few that told me that this was the house for us. 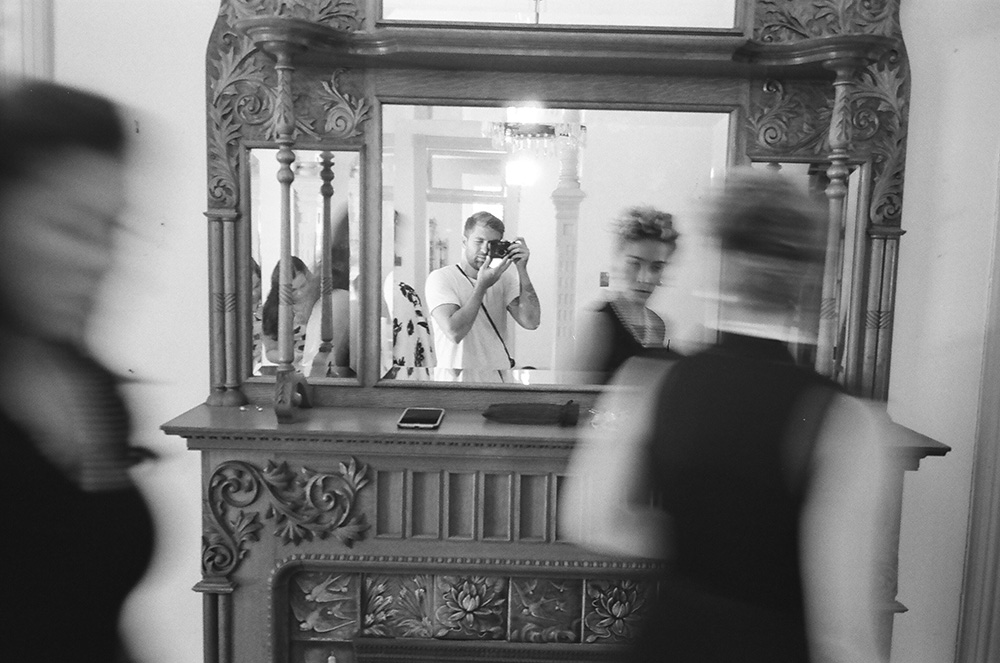 Almost exactly one year before first walking in these front doors, my husband and I made the difficult decision to leave our Brooklyn life to return to the city where we had grown up. We had always planned to return to San Antonio, but actually making the move was not easy. Our school-aged daughters were not enthused to move, to say the least. They were New Yorkers through and through…and, after living there for over twenty years, my husband and I were pretty ‘New York’ as well. Nevertheless, we knew that it was time.

We were excited about what was happening in San Antonio, and the idea of being part of the growth was irresistible. We made a plan that I would go ahead with our daughters so they could start school at the beginning of the school year, while my husband stayed behind to wrap up his business and sell our Brooklyn house. What we had hoped would be just a few months’ separation turned into a nine-month ordeal. At one point during this time my husband mused, “It was so hard to move to NY, so it makes sense that it would be hard to leave as well.”  And it was. 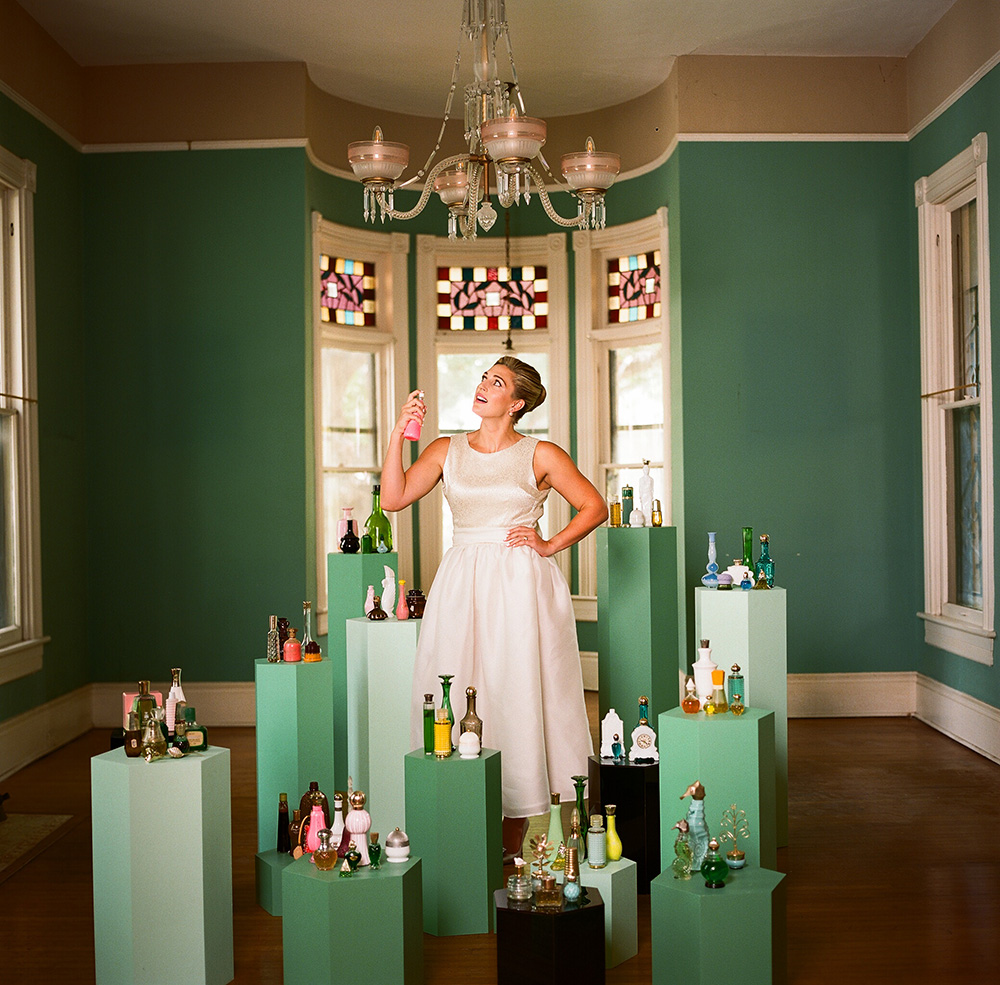 The move to San Antonio was a leap of faith for both of us.  During our time in New York, I worked as a designer and creative director in the fashion industry while my husband owned and operated two bars in downtown Manhattan. We weren’t exactly sure what we would do in San Antonio, but we knew we could use our experience to make something happen. So, I found a little month-to-month rental within the school boundaries, got my girls started in classes and set to work figuring out our future.

Pretty quickly, luck shined upon me as I found a design job at an iconic Texas jewelry company. It seemed custom-built for me and I still marvel at the fact I am back in my hometown now working for a company that I have known my whole life. Encouraged that things were starting to fall into place, I started to work on building a new circle of professional and personal friends. I joined a fashion group, I attended an architectural talk, I went to First Friday and Second Saturday, and did the sometimes hard work of just saying hello and introducing myself to people. I realized that if I wanted to get involved I would need to be involved. I also really started to look at real estate in earnest. I knew that an important part of our family feeling settled and back to normal was for us to be together in a place that felt like home.

We couldn’t buy anything until we wrapped up the sale of our New York house, but it still felt good to dream and plan. I combed the streets and the internet obsessively, both hoping and fearing that I would find something good. Eventually, I heard word in the neighborhood of a really special house that was supposed to go up for sale after the New Year. All through that spring, I kept an eye on it, but it never appeared. Finally, as the sale of our New York house was nearing its closure, I decided to take a chance and pen a letter. I introduced myself and explained how I thought this was the house for our family. It was an honest and heartfelt long shot, but I had nothing to lose. Then exactly one day after we closed the deal on the sale of our Brooklyn house, I got a call. The woman on the line said she had gotten my letter. She got right to the point and said that she wanted to meet my daughters and me, as she believed we were the right people for the house. The next day, there we were, inside of this beautiful grande dame. 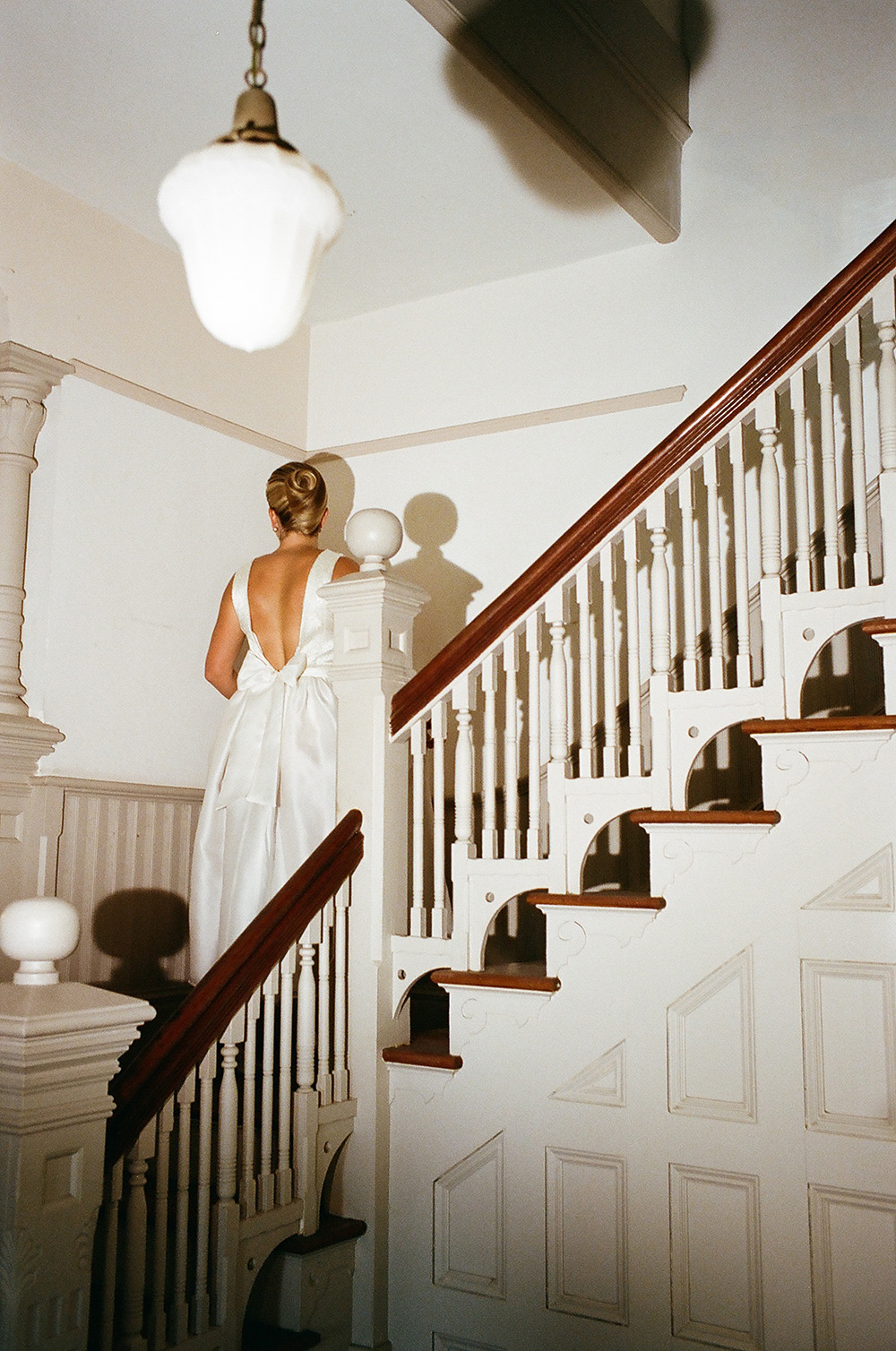 We immediately felt at home.  The owner described the house as “not fancy.”  I knew exactly what she meant. Despite its size and its 120-year old details, it just felt like a home…a beautiful one, but a real one…made for family and friends, with lots of space for visitors, and our piano, and our dog…and parties. We went for it.

In a later conversation with the owner, she said that the house was, “a lady settling into her old age.”  I loved that description, and perhaps that is what I like about old houses-the fact that if you look hard enough, you can see the narratives of their history all over the place. As it turns out, this old lady has an interesting history that you can see clearly once you know it. Records show that she was built in 1895 but looked quite different from her appearance now.  When the San Antonio River jumped its banks and flooded the neighborhood in the 1920’s, she was a victim.

When the owners repaired the damage at the time, they decided to change the original appearance of the front of the house. Before I even had an inkling of an idea that this would be the house for us, I wondered about the hard-to-figure-out pink house on the corner. It had a dual-personality, with wide tiled and stucco-ed porches across the front and an old-world, castle-like appearance on the side.

When I heard this history, the patchwork made sense. The interior had kept its original point of view, however, and part of the reason that it immediately felt so familiar to us is that it had so many of the same details as our Brooklyn house. Built only a few years apart, they followed the same template. The moldings and woodwork were almost identical, as well as the plaster walls and picture rails, and the mantles and tile-work surrounding them. When my daughters and I had a private minute to ourselves during the house tour, they both gave me an enthusiastic thumbs up. We all knew it. When I left the house that day, I immediately texted my husband and said, “I found our house.”  And indeed, I had.

When I realized I had something that could help move the dreams forward of my fellow creative friends, I was so happy to share our space. What made our home work for this vision was that it was empty, untouched, full of historic character reminiscent of the 1930’s-50’s, and it was empty. Now, when I look at the beautiful images created for this first September issue of Eleanora Magazine featuring the legacy of legendary Harper’s Bazaar editor Carmel Snow, I realize that I too am a part of the transformation taking place here in San Antonio that will create a legacy that fosters creators for generations to come. I want to support it and participate in it however I can. Here’s to the beginning of things…in our special ‘hometown.’ 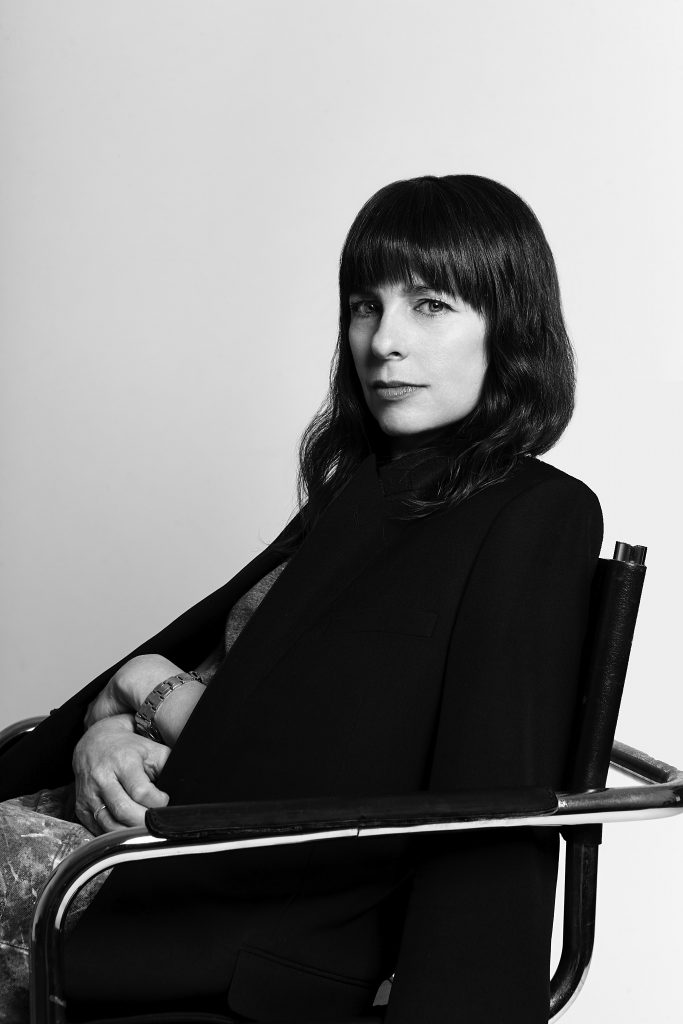 Sarah Herr is Director of Design at James Avery Artisan Jewelry. Prior to making the move back to San Antonio in 2017 (her hometown), Herr worked in New York City in the design industry for over twenty years, most recently serving as Senior Vice President / Creative Director of women’s contemporary brand Cinq á Sept. Before that, she was the Director of Design at Elizabeth and James and has spent time at Gap, Cynthia Rowley, and Betsey Johnson. She lives in King William with her husband and two daughters. Connect with Herr on LinkedIn and on Instagram @sarahherr.